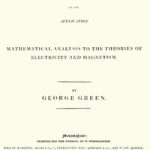 where P.V. stands for principal value of the integral and the function

The integral form of this useful identity is known as the Sokhatsky–Weierstrass theorem. The integral appearing in the expression above is a Hilbert transform.

The second trick that I found useful deals with the computation of the residue for functions that can be written as a fraction. Say function

has a pole in the complex plane at

. Then the residue of

is simply given by

This result is useful to compute the residue of expressions like

that often occur in Green’s functions

Sorry, the comment form is closed at this time.