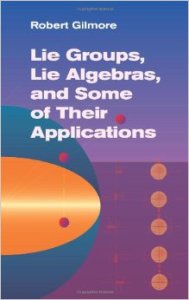 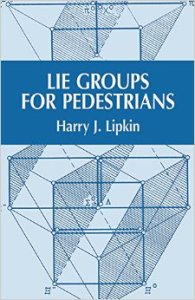 I recently picked up two books on Lie groups and algebras.  The first I read was Lie Groups for Pedestrians, by Harry Lipkin.  As the title suggests, this book is an introduction to Lie groups.  The author tries to hide most of the mathematical complexity of Lie’s theory and focuses on examples from physics.  The book is easy to read, but it seems to me that it is really designed for the typical pedestrian that circulates near the elementary particle physics section of physics department.  I found it somewhat useful and at time interesting.

Robert Gilmore’s Lie Groups, Lie Algebras, and Some of Their Applications is a nice introduction to Lie’s theory written from the perspective of a mathematician.  I really liked Gilmore’s introductory chapters that so neatly summarize various topics propaedeutic to the study of Lie groups and algebras (field, group, vector space, algebra).  Applications to quantum mechanics are scattered throughout the book and tend to focus on simple aspects (spin, the SU(2) group, second quantization).  Lie’s theory is pretty involved and so even this book, at times, can be challenging to read.

Why am I interested in Lie algebras and groups?  Lie algebras are at the basis of second quantization techniques.  Some results from Lie algebra are used in many-body theory, for example the Baker–Campbell–Hausdorff formula.  However, the aspect that is most interesting for me is the connection between the formalism of generalized normal ordering of Mukherjee and Kutzelnigg and Lie and Hopf algebras.

Sorry, the comment form is closed at this time.