There are interesting parallels between these works and papers published in the quantum chemistry literature.  And why not, let’s add a little debate on TD-DFT: 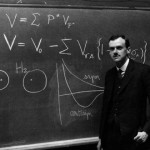 Chemical Physics just published an interesting article by Werner Kutzelnigg on the “Solved and Unsolved Problems in Relativistic Quantum Chemistry”.
I particularly appreciated the extensive discussion on why a relativistic many-electron theory needs a Fock space formulation and the subtleties of the field-dependent vacuum. Great read, I recommend it.

My first single author paper (submitted to JCP) was accepted! It was a terrific learning experience.

I just found a few interesting papers, one on coupled cluster theory and one on orbital localization. I think they are pretty interesting and worth a read.

I just finished reading a new article by Musial, Perera, and Bartlett on multireference coupled cluster theory. This is an interesting paper that considers a simple but ingenious MRCC approach based on the equation of motion formalism.
For a CAS(2,2) problem, the reference wave function is taken to be a closed shell determinant

with the active orbitals either fully occupied or empty.  One then solves for the coupled-cluster wave function for this double anion state to get an intermediate wave function

.  The MR ansatz used by Musial et al. is

removes a pair of electrons among all the occupied orbitals in

As the authors claim, the theory is simple, and simple in a multireference many-body approach is good. However, there is one problem with this approach. The energy is very sensitive to the choice of the original orbitals. In my experience, state-specific approaches based on the Jeziorski-Monkhorst ansatz tend to be a bit less sensitive. It would be great if the theory could also determine some optimal set of MOs (Bruckner, NOs, …).

My article on internally contracted MRCC theory: “An orbital-invariant internally contracted multireference coupled cluster approach” [F. A. Evangelista and J. Gauss, J. Chem. Phys. 134, 114102 (2011)] was finally published in the Journal of Chemical Physics. In this paper I try to depart from the Jeziorski-Monkhorst (JM) ansatz and explore a simple generalization of single-reference coupled cluster theory that uses a multideterminantal reference wave function. This works relates to previous studies of Banerjee and Simons [A. Banerjee and J. Simons, J. Chem. Phys. 76, 4548 (1982)] and many others.
The central result is that the ic-MRCC approach is more accurate than state-specific MRCC approaches based on the Jeziorski-Monkhorst ansatz. Moreover, ic-MRCC is orbital invariant (we test and prove it in the paper), and thus it is formally superior to JM-based methods.
A lot of work still needs to be done in this direction and some of the problematic aspects of the theory are discussed in the paper. The most important one is the elimination of linearly dependent excitations.