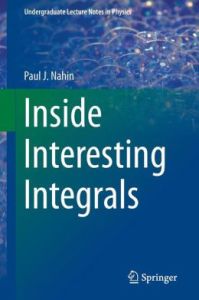 I recently purchased a couple dozen books for the group and out of curiosity decided to add this book to the order. Although I don’t use integrals much in my research (we mostly deal with linear algebra and tensor algebra) I found this book to be extremely interesting. It’s so interesting that I cannot stop reading it and put it down.
Inside Interesting Integrals is a great book if you want to revisit your integration skills and learn all sorts of tricks to compute definite integrals.

In the past two weeks I read two papers from arXiv that present some very interesting new ideas.  The first paper, Extended Møller-Plesset perturbation theory for dynamical and static correlations, by Takashi Tsuchimochi and Troy Van Voorhis, deals with symmetry restoration in second-order perturbation theory.  The extended MP2 method presented by the authors looks promising and I found it very interesting because it can automatically adapt to single- and multireference problems.  At the very end of the paper the authors even show that their technique can be used to compute excited states.

The second one,Compact wavefunctions from compressed imaginary time evolution, is from Jarrod R. McClean and Alán Aspuru-Guzik.  This paper mixes compression techniques with a propagation of the Schrödinger equation in imaginary time to compute the ground state energy.

Our new lunch room and visitor space is coming along very well.  Check it out! 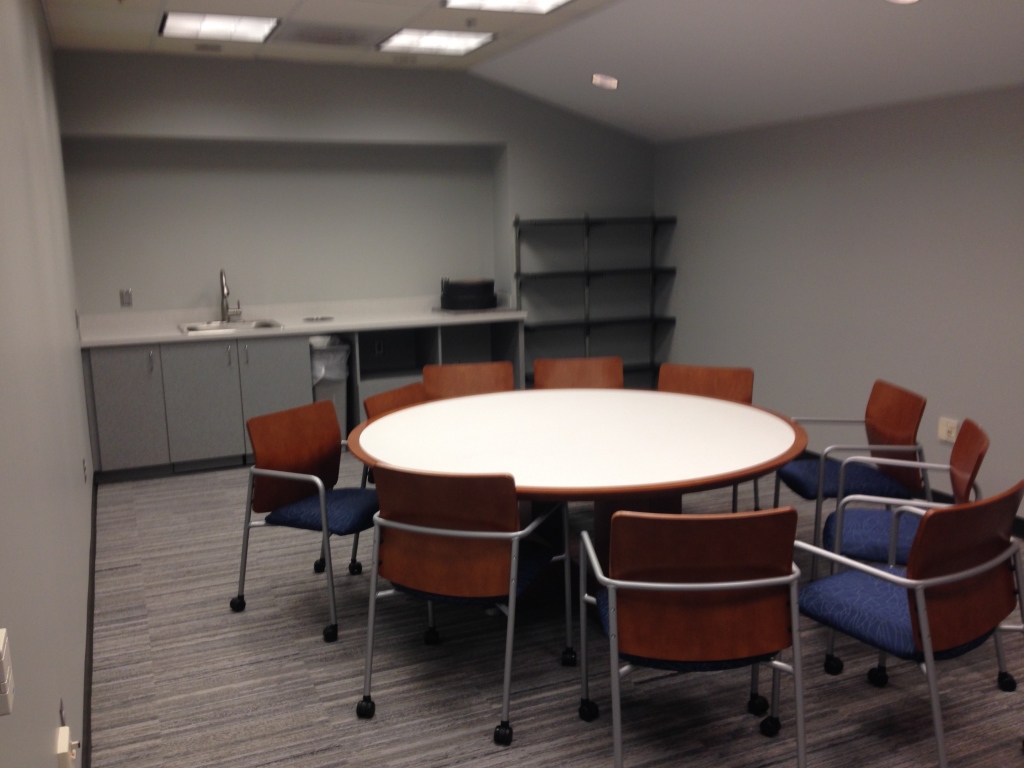 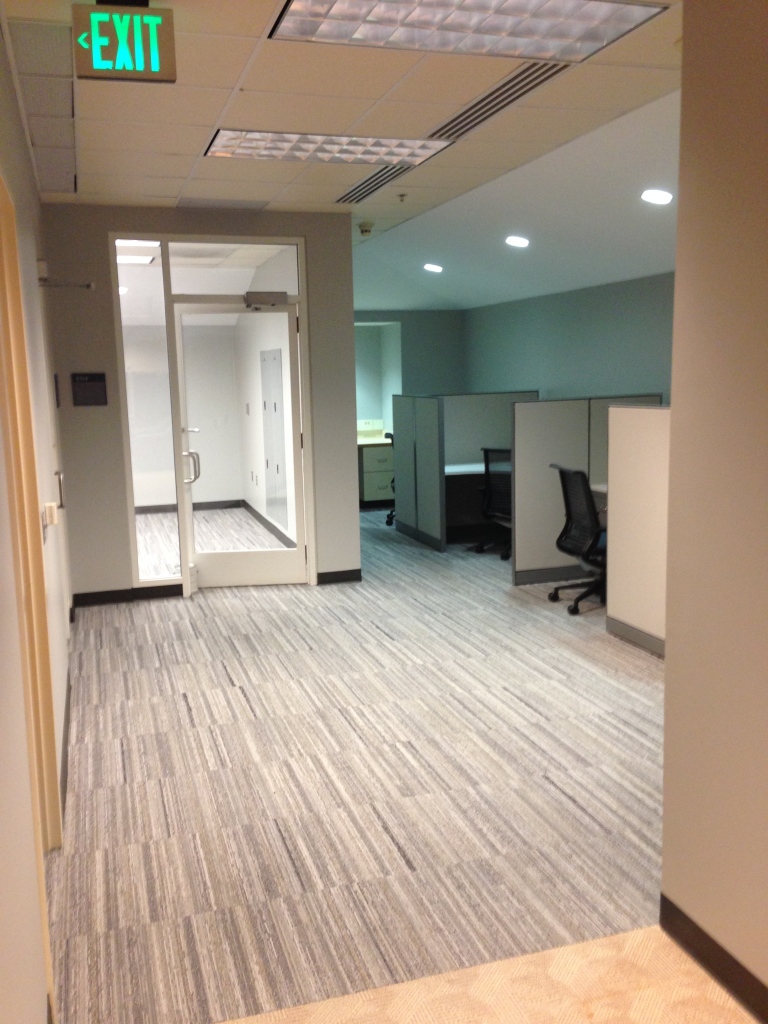 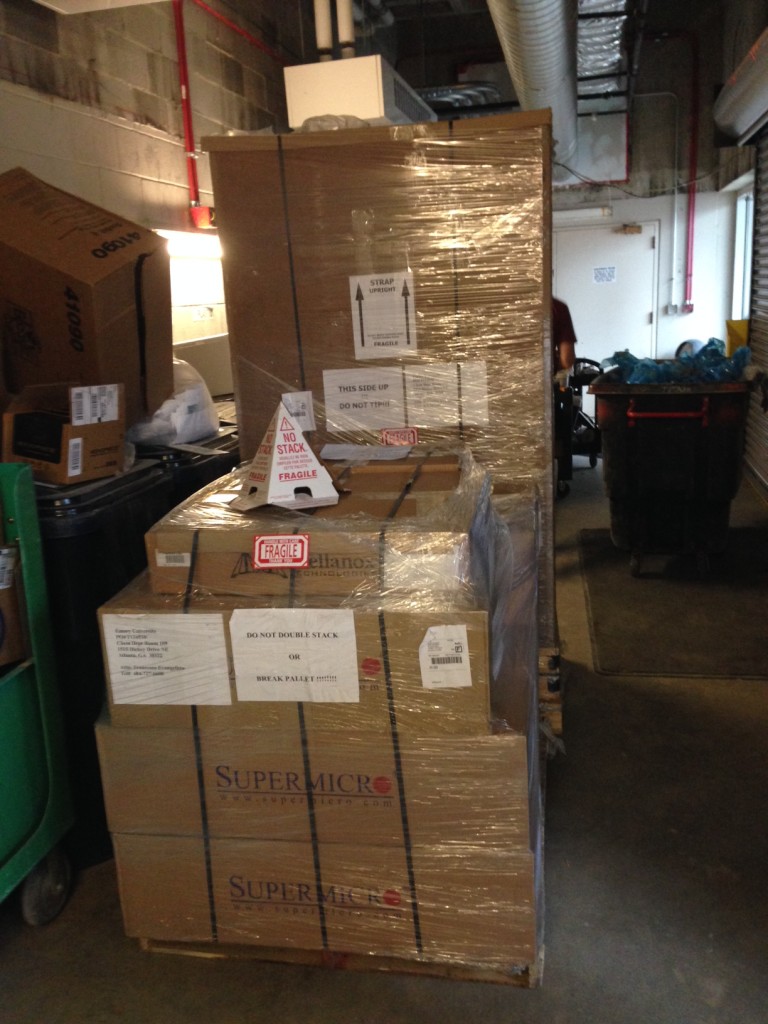 As you can see it barely fit into our elevators. 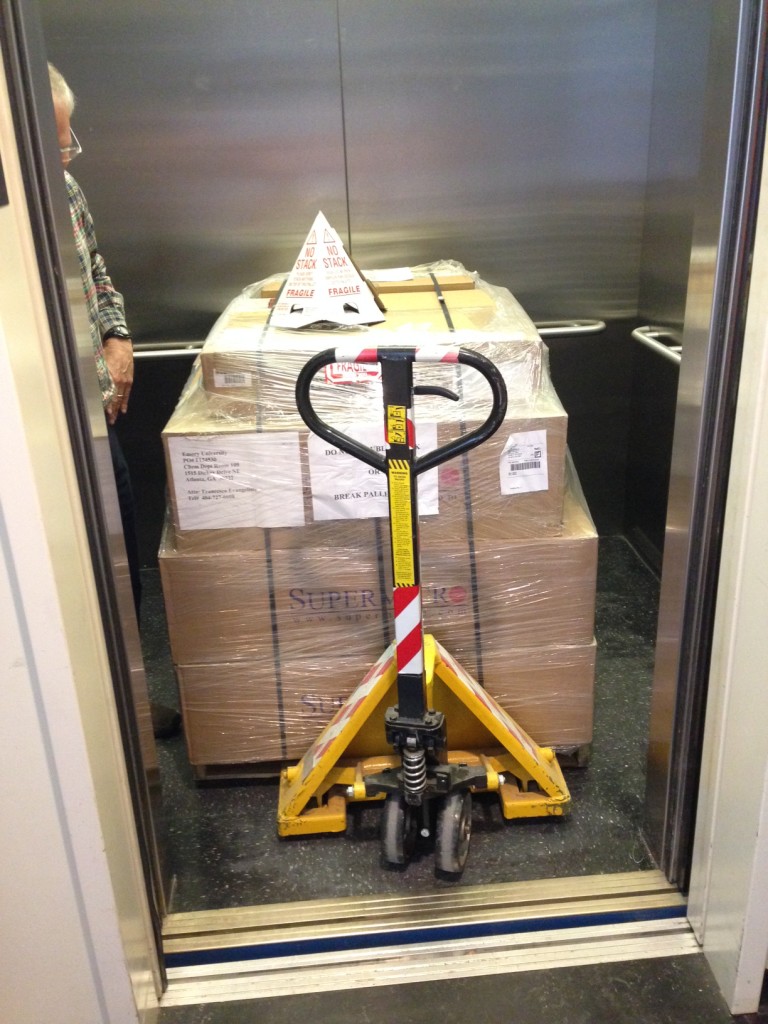 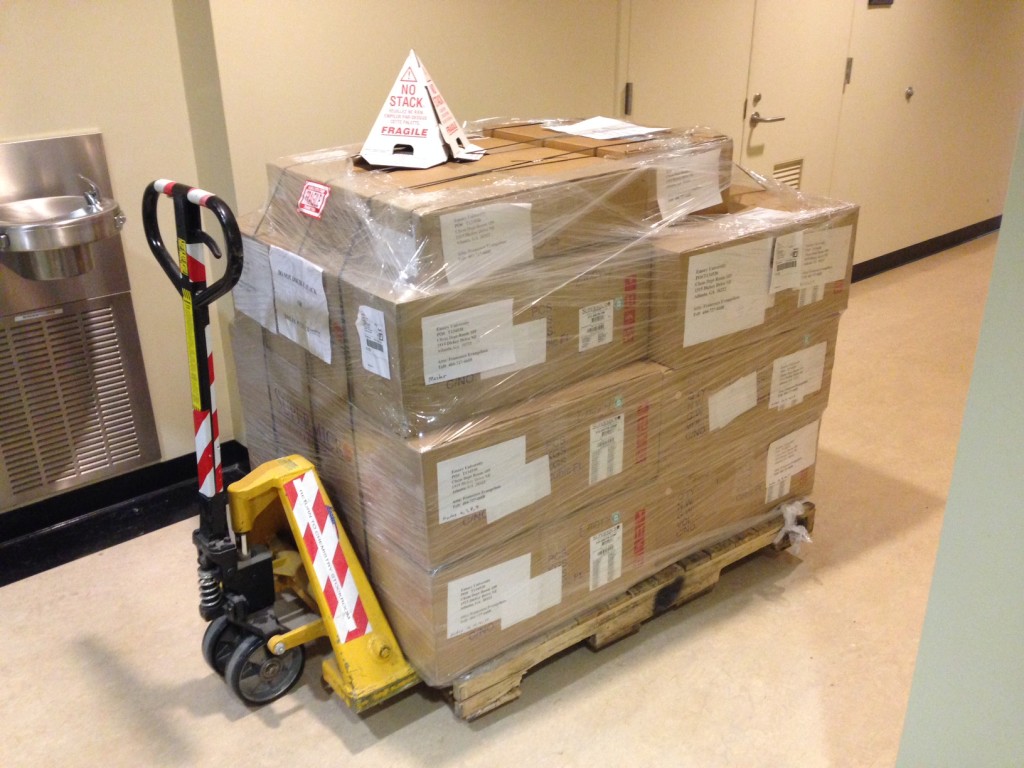 Wallace and Francesco building the cluster. 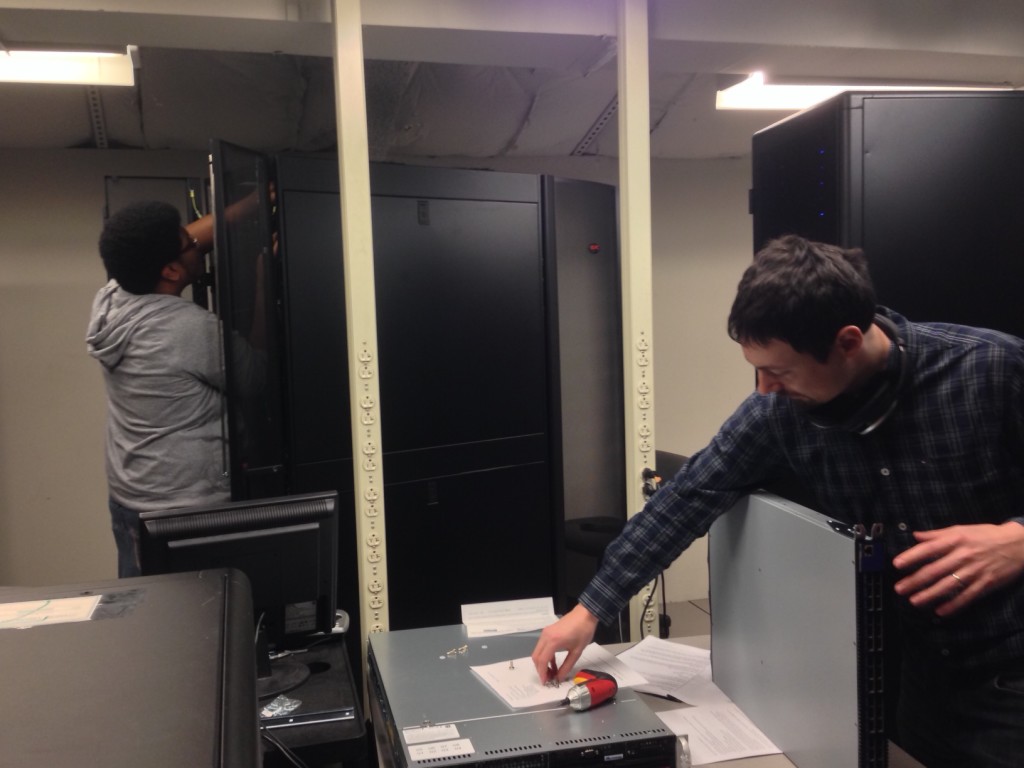 Front and rear. Check out our QDR Infiniband switch! 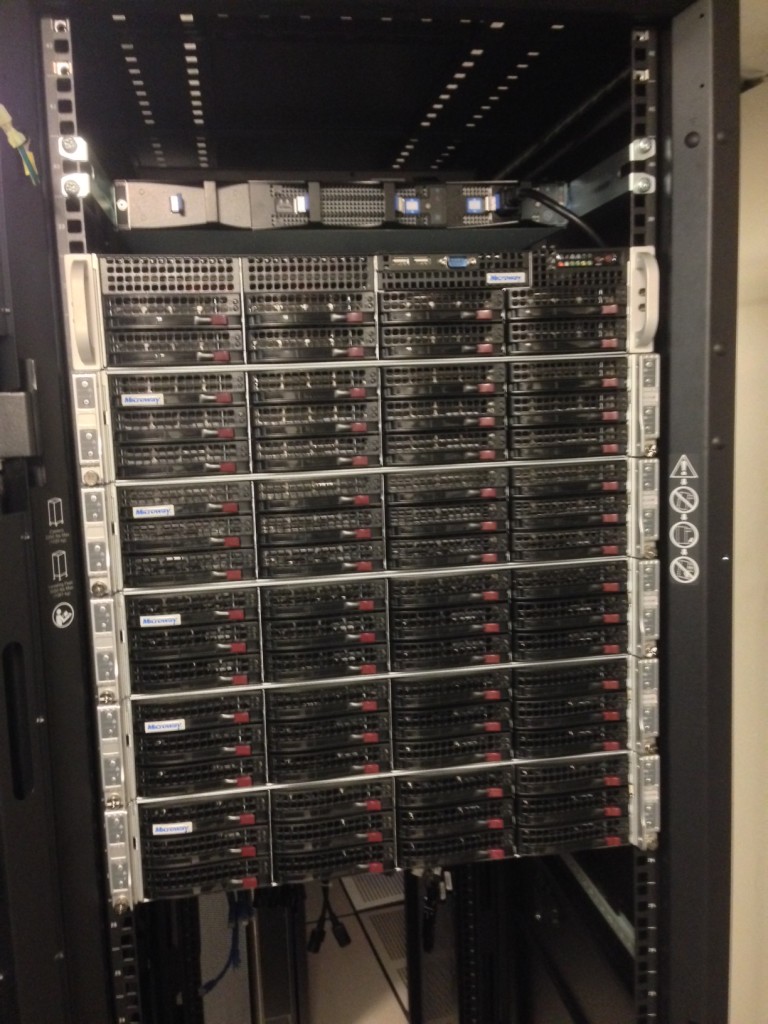 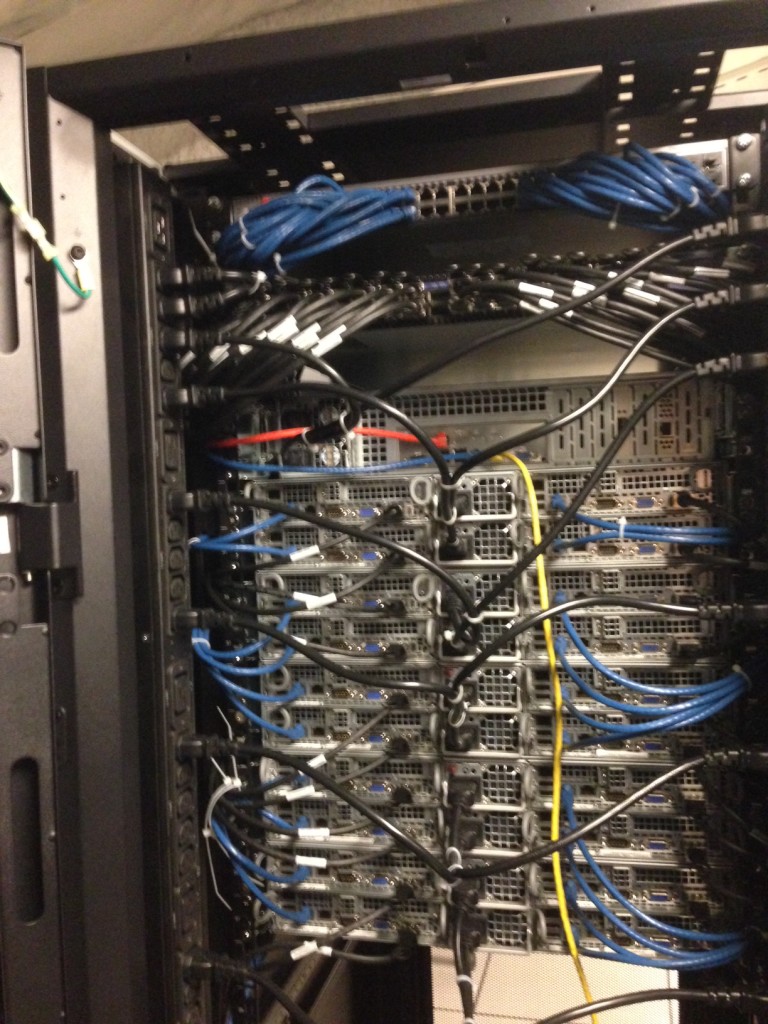 I just created a web site for the 2014 meeting of the Southeast Theoretical Chemistry Association (SETCA). This year this event will be hosted at Emory and I will be the principal organizer. Information about the meeting can be found at www.setca2014.info.

D-Wave, a Canadian company that specializes in quantum computing recently came out with a 512 qbits quantum annealing processor. In this great lecture, Matthias Troyer talks about testing this device to check if it really functions as quantum computer. I found this lecture on Scott Aaronson’s blog, a interesting blog worth following.

Just found this interesting paper on the structure of the simplest Criegee intermediate. The Criegee has been for a long time an elusive molecule and pops up in many fields like astrochemistry and atmospheric chemistry.

Just read this very interesting article on compression of the wave function information using singular value decomposition of the full CI vector. The idea of factorizing the CI matrix can already be found in a paper by Koch and Dalgaard, however this earlier paper showed results for system with small number of electrons and basis sets and has a different purpose. As mentioned in the paper, the cost of the SVD step used in the compression step scales as

is the size of the FCI space. This step actually costs a bit more (asymptotically) than what is required to evaluate the product of the Hamiltonian matrix times a trial vector.

A general quadratic programming problem consists in minimizing a quadratic function of the form:

is subject to inequality and equality constraints:

are general matrices that enforce the constraints.

It turns out that there are a few interesting problems in electronic structure theory that can be formulated as quadratic programming problems.  For example, the energy of a Slater determinant is:

is the diagonal matrix element of the one-body component of the Hamiltonian, while

are Coulomb and exchange integrals, respectively.  All the sums run over the occupied orbitals of the Slater determinant.

If we introduce the occupation vector

, then the energy of a Slater determinant may be written as a quadratic function:

.  Now let’s ask the question: given a set of molecular orbitals

, what is the occupation vector that minimizes the energy of a Slater determinant with a given number of alpha and beta electrons (

.  Binary quadratic problems are NP-hard, but in the case of the electronic structure counterpart, a good dose of heuristics (physics) can be used to find a solution.

For a wave function whose two- and higher-body cumulants are zero, in the natural orbital basis the energy expression is identical to the  one for a single Slater determinant, with the difference that the natural occupation numbers

.  Thus, finding the optimal uncorrelated state is equivalent to a standard quadratic programming problem.  Interestingly, the computational complexity of this problem appears to depend on the properties of the matrix

is positive definite this problem can be solved in polynomial time, otherwise it is NP-hard (according to the wikipedia article on quadratic programming).  I do not know whether the

that arises in electronic structure problems is always positive definite, but I suspect it is.  It would be interesting to check this property numerically.  In addition, if the orbitals are variationally optimal, then

will either be 0 or 1, and the uncorrelated state will be a Slater determinant.

Today I presented my poster at the Molecular Quantum Mechanics conference in honor of Rod Bartlett. You can download a copy here.