Time-dependent DFT is de facto the only DFT approach used to compute excited states. We are interested in exploring time-independent DFT methods that can be justified on the grounds of a variational approach to DFT.
Our first achievement has been the formulation of an orthogonality constrained DFT computational scheme. This method was derived formulating a variation functional for the excited state and imposing an adiabatic approximation to the exchange-correlation functional. At the same time we developed a SCF algorithm that can enforce orthogonality between the SCF solution and a given determinant. 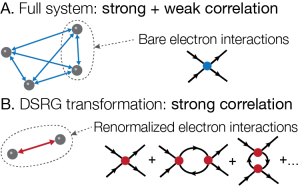 Electronic structure theories based on the renormalization group remain largely unexplored.  We have recently proposed the driven similarity renormalization group (DSRG) method, which is based on a field-theoretic formalism originally introduced independently by Wegner and by Głazek and Wilson.  In addition to formulating the DSRG using a single Slater determinant reference, we extended it to use a general complete-active-space reference using the Mukherjee–Kutzelnigg generalization of Wick’s theorem.

We are currently interested in approximate relativistic theories that permit to include scalar and spin-orbit effects easily into existing DFT and wave function methods.  We are currently implementing the exact two-component approach (X2C), in particular its one-electron variant.